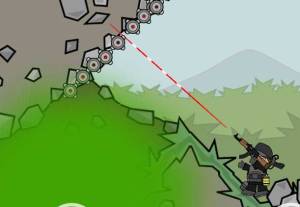 Doodle Army 2 better known as Mini Militia is a multiplayer Action game developed by Appsomniacs which is rising through the charts on both iOS App Store and Play Store app markets.

Appsomnics are also the developers of the earlier version of Mini Militia like Doodle Army and Doodle Army Boot Camp. Mini Militia was a collaborative effort of a few friends at Appsomniacs who had the passion for developing a game that can be played by all age groups.

At the time of writing this post, Mini Militia is the 5th most trending free game and 35th in Top Grossing Game on play store’s “Top Chart.”

Mini Militia. Recently, several Mini Militia Newbie’s dropped us questions about Mini Militia tips and tricks. If you are one of them and wondering – Why am I failing to get high score and rank? you must read this post.

Once you go through these tricks and go out to play a Mini Militia match, your gameplay might increase up to 80%. Thus, these tricks will also help you rank up fast.

Mastering Mini Militia takes time. But for a Newbie, it becomes a pain in the a**. Neither he/she knows about those small tricks in the game that sets apart a winner from a loser. Also, there are players with modded apks that make it extremely difficult to play and win.

These Mini Militia tricks are for both Android and iOS. Most importantly these tips and tricks are best for those of you who hate Mini Militia hacks and want to win matches without cheating.

One more good combination is about having pistol and shield together that can let you block the bombs and bullets, thrown towards you from multiple places. The shields can highly help you to maintain a good health level by blocking those bombs and bullets from hurting you at first place.

Time bomb is one more gift that must be utilized in the best ways. Make sure to make a move, place a time bomb and let the opponent follow you to get killed by the bomb.

Every other weapon in mini militia has its own range, and one needs to explore a lot with them to find the best weapon suitable for their gameplay.

Commit suicide only if you are not able to find a way to get out from enemies trap. If you are randomly committing suicide in the gameplay, then you are about to lose some precious points for no reasons.

The following are some of the working tips that you can follow up to rank high in the battle field.

You must never be facing pro players in the battle field and with opponents who have higher score than you at first place. Avoiding such gameplay can help in gaining a good score by playing with opponents who are way equal to your rank level.

When you have been completely surrounded by the opponent players, then make sure to finish off the first two players and then walk through to kill the remaining ones.

Lower the shield when the bomb is being thrown at you could save one’s life.

Mini Militia Unlimited Bomb Hack. You will get to throw as many of these undermentioned bombs by using this hack.

– Grenades: Pull out the pin and throw them quickly and boom! Your rivalry on the floor in pieces.
– Green gas bombs: These bombs spread toxic chemicals in the air that instantly kills the opponent.
– Sensor Bombs or Proximity Mines or Timer Bombs: These bombs stick to objects around it like walls or floor, once another doodle gets near them they explode. One important thing to remember about sensor mines in Mini Militia is that they disappear after 1 minute of implantation if they do not get exploded.